Ladies Rooms Around The World - "A safe haven for intimate conversation about issues that are often taboo at home or in the mainstream." - Photographs and Words by Maxi Cohen 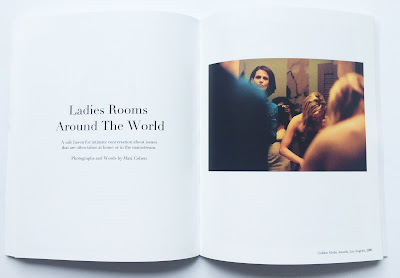 "No matter how hard I try to explain to the publicists handling the 1999 Golden Globe Awards that it was in their best interest to let me film in the ladies room, I did not succeed. A friend had insisted that the "Globes" was the quintessential Hollywood event and that people were a lot looser here than at the Academy Awards. But the more I tried to talk my way in, the further I got from the door. As it happened, when Christine Lahti's award was announced she was nowhere to be found to accept it. She was in the ladies room…" - Maxi Cohen