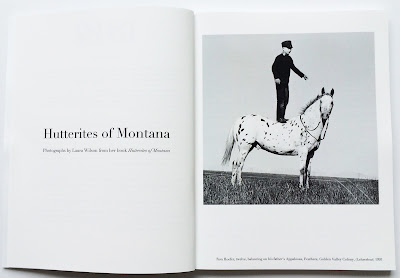 1814: How did you come to choose Hutterites as a subject to photograph?

LW: Still vivid in my mind is my first glimpse of the Hutterites. I was working for Richard Avedon and we were driving in Montana at dusk. There was a lovely pink sunset. We saw in the distance across an open meadow of wheat, figures walking. The girls in long, colorful dresses, like Christian LaCroix, the boys in white shirts and black pants. We drove up next to them and realized they were teenagers out courting. They said they were Hutterites and told us we could stop by the colony. When we went and visited them I knew that there was more than just a picture of two, because when you are working as a photographer or a journalist you realize you can immediately see a story. There aren't many stories that haven't been told in photography… and in the West, as Larry McCurty said, "There's not a belt buckle or a spur that hasn't been photographed". But these Hutterites, I'd never seen a picture of them nor had I heard any mention of them; they don't allow photography, so when I finished my work with Avedon, I went back to Montana alone to spend time in various colonies.