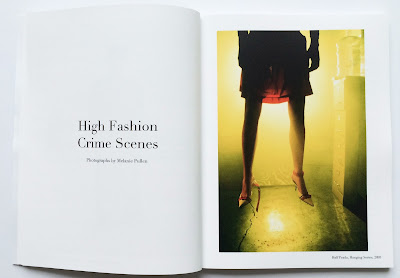 1814: Can you tell us about the process for selecting the crime scenes you chose to recreate in High Fashion Crime Scenes?

MP: I worked for several years with the NYPD, LAPD and the Los Angeles County Coroners Office to find crime scene photos between 1912 and 1950. I went through thousands of these crime scene photos, generally anonymous scenes and narrowed it down to about 100 photos to recreate and reenact. From there I went to fashion houses and pulled clothes that I thought would tell a story. At that time I kind of treated each shoot like a movie enlisting the help of up to 100 people to per shoot. We would light each scene with traditional hot lights that were used in film. I worked with stunt teams from CSI to help me with hanging the models, and with shark divers for the underwater scenes. Also to accurately color the skin and create proper death wounds I worked with a makeup team that was wonderful. In the end I had to work with commercial factories to print my images on photo paper at such a large size… the largest of the images are some of the largest in the world on Kodak paper. The idea is that you look at the images and they feel very cinematic.